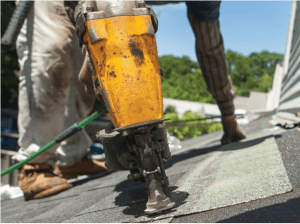 So what to do in a Maine winter? Certainly snow sports, a good book, or dreams of spring golf are excellent pursuits but for the chairperson of the condo maintenance committee, winter is a good time to be planning building envelope repairs. The building envelope comprises the roof, siding, and foundation with all of the windows, doors, other penetrations that go with the envelope.

As the building envelope is probably one of the most important, if not the most costly common condominium asset, it bears careful monitoring. This article will attempt to provide a guide of the typical problems and issues encountered in most condominium buildings with most of these associated with water infiltration.

Starting from the top, most condos use asphalt shingles for sloped roofs and EPDM membranes for flat roofs. Both last a long time with asphalt shingles having lives of 25 to 30 years while EPDM membranes start to fail after 20 years. Most roofs start to show their age with leaks of which the great majority are concentrated in areas where dissimilar material or horizontal and vertical surfaces meet. Defective or poorly installed flashing is usually the culprit.

Caulking or roof tar is often used for repairs but these tend to be only temporary fixes. Watch for curling or lifting shingles as these are good signs of an aging roof. Roof can also fail prematurely from overheated and poorly vented attics. And speaking of attics, the irony is that ice dam leaks are caused by heat rather than ice. Ice dams are formed at the edges of roofs due to heat escaping into the attic from poorly sealed exterior walls or inadequate insulation and melting roof snow setting up a freeze/thaw cycle that eventually works under the shingles. Those issues should be addressed first before bothering with external electrical heat tape or similar measures.

Many of New England’s condominiums are sided with wood, vinyl, or cement composite clapboard siding. For the most part these materials do their job to keep most of the moisture out of the building but they are not the only barrier. In fact, one of the most important components of exterior walls is the building wrap beneath the siding. This material’s purpose, going by such names a Tyvek or Typar, is often misunderstood, even by contractors.

When it was first introduced it was called a vapor barrier and is still thought as such by many. In fact, building wrap should be renamed and called building flashing as that is its true purpose. Water gets behind all siding whether it is clapboards, brick, or stucco. The trick in good building envelope design is to insure this water infiltration is stopped by a drainage plain which for most residential structures is building wrap. This is why most exterior wall leaks can be traced back to missing or poorly installed building wrap.

If building wrap were only used for a vapor barrier function, then not taping the seams of the wrap would not be a big deal. But as a building flashing, it is critical that seams (particularly vertical ones) are taped, holes are patched, and the wrap is properly integrated with the flashings around doors and windows. When a unit owner reports a water infiltration problem through the walls it is a good idea to focus on problems with the wrap rather than the siding. To make matters worse, if the wrap is failing it is very possible water damage may also be occurring to the sheathing and insulation behind the wrap.

This brings us to windows. The problem with windows is they belong to the unit owner and are not a common element under most condominium rules. However, the building committee is not off the hook with window leaks as these same condo rules that assign the windows to the unit owners also assign the window frames to the association’s responsibility. In most cases it is not the window that is leaking but the frame’s flashing (or lack of flashing) causing the problem.

Poorly installed windows that did not follow the manufacture’s instructions, that no one read on the job site, are one of the biggest sources of homeowners’ complaints. Often the only solution is to remove the siding around the window, inspect the flashing, and re-flash. Many such problems can be minimized by preventive inspections using either visual methods or instruments such as moisture meters to focus on the specific moisture path to diagnose the issue.

Water infiltration problems are like odd noises in your car. They do not go away they only get worse. By addressing these problems now your dreams of early spring golf may yet be realized.

Printable Version of this Article

Subscribe now to get Criterium-Brown/Rand Engineers news and informative articles sent straight to your inbox.